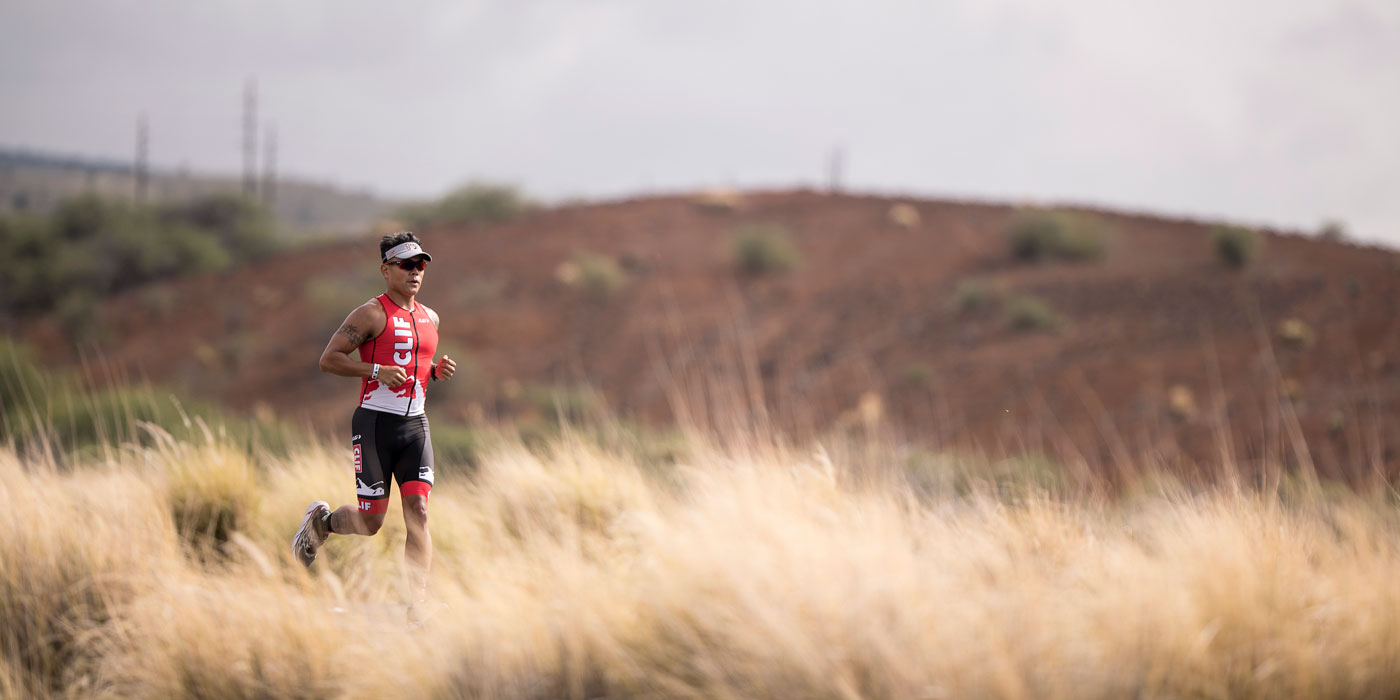 If you told Cliff Eclarino six years ago that he’d compete in the IRONMAN World Championships at Kona in 2017, he wouldn’t have believed you. He might have even called you crazy.

But on October 14, 2017, the 41-year-old father of three joined world-class athletes on the lava fields of Hawaii’s Big Island for a 140.6-mile journey billed as “the ultimate test of body, mind, and spirit.”

Cliff (the person) became the IT Manager at Clif (the company) almost seven years ago. At the time, he tipped the scales at 212 lbs—49 lbs more than he weighs now.

He didn’t start his new job with plans to become a triathlete—he didn’t run, didn’t own a bike, and didn’t know how to swim. But huge transformations often begin with the smallest of decisions. For Cliff, that small beginning came in a carpool.

“I was carpooling in to work with someone who was training for her first half marathon,” Cliff recalled. “One day, she wanted to run around the lake and didn’t want to run by herself. I thought, ‘I’m not a runner!’ But I went with her anyway.”

He hadn’t run—at all—since he did the mile test in his high school phys ed class. But that run around the lake woke up his inner athlete.

Feeling inspired, he signed up for a half marathon that was three months out. Then he went to Clif Bar & Company’s employee gym and asked for help. He began training with other runners at work—Clif employees are encouraged to take a 30-minute wellness break every day—so finding running partners wasn’t difficult. Neither was finding a personal trainer, since the company employs four trainers full-time at the in-house gym.

Before he knew it, Cliff was buying himself a bike, his first-ever geared bike. (The last bike he had owned was a BMX when he was a kid.) Pretty soon his personal trainer, Joe Phillips, had him out riding 5 miles, then 10, then 30.

Around that time, Clif Bar sent out an all-company announcement celebrating an employee from the finance department who had just competed in IRONMAN Coeur d’Alene.

“I didn’t know what IRONMAN was,” Cliff confessed. “I looked it up, and I thought, ‘I can’t even sleep for 12 hours, how could I ever work out for 12 hours?!’ It seemed very far-fetched to me.”

One year later, though, he was learning how to swim—thanks to Joe, his personal trainer at work.

“I had never done lap swimming before,” Cliff said. “But I thought, if I can swim, and I have a bike, and I know I can run, well, maybe I can do a small triathlon!”

He did his first triathlon “for fun” in 2013. He met a lot of people and made some friends. A few of them were planning to compete in 2014 IRONMAN Canada. They asked Cliff to join them. He said yes.

And so a triathlete was born.

THE FAMILY THAT RUNS TOGETHER

Around the time Cliff started competing in IRONMAN, his wife, Caroline, started running. And then she learned to ride a bike. And then she thought, “Wait. If Cliff can run and bike and swim, so can I!”

In 2016, Caroline, an electrical engineer at Abbott Labs, competed in her first triathlon—and then her first half IRONMAN in 2017.

“It was like, ‘Oh well, that’s what our parents are doing, so that’s what we should do too,’” Cliff explained. “It’s trickled down.”

In fact, Cliff wasn’t the only one who competed at Kona this year. His children did the IRONKIDS Keiki Dip ‘N Dash—a one-mile run and 150-yard swim in open water.

But all along the way, as Cliff began competing more and more, IRONMAN Kona was out there, a fantasy. Then earlier this year, it became real.

“Kona was a dream. But now the reality has set in—this is a really hard event,” Cliff said. “It’s a second job, 20 hours of training a week on top of a full-time job and being a dad.”

In the weeks leading up to Kona, Cliff was in full training mode—and found himself bombarded by support from all sides.

“At Clif Bar, the support system is amazing. It’s almost like the company is carrying me along on this ride,” he said. “A lot of other triathletes who work here offer their advice and let me train with them. They’re constantly checking in, making sure I’m on it, making sure I’m not just training hard but resting hard, too.

“My department, my boss, my team, my colleagues—when they found out I was doing Kona, they were in full support, ‘Let’s make sure you have the time and flexibility to get your training in.’ …And having access to personal trainers here just opens up everything, it’s really changed me into an endurance athlete!” Cliff said.

He also consulted with a Clif Bar nutritionist who helped him create a nutrition plan with a schedule of eating and drinking for training days and race days.

And of course, he counts on Clif Bar products day in and day out. Peanut Toffee Buzz and Peanut Butter Banana with Dark Chocolate are his go-to bars. His top SHOT gels are Citrus and Razz, and Salted Watermelon are his favorite BLOKS.

But beyond all the support Cliff gets at work, the support of his family is indispensable. His mom is so proud, she calls him her “Iron Son” and shares his competition photos and videos with all her friends.

And his wife Caroline—she’s the true hero, Cliff said. “The cool thing is, I got her into triathlons, so she really knows what it takes. She has been super forgiving.”

The couple shares a calendar, and Caroline plots out all Cliff’s training sessions on it, along with the kids’ swimming, dance and gymnastics commitments.

“She covers all of it so I can go train all the time,” Cliff said. “She’s been beyond supportive, and she really likes Clif Bar, too—she supports it as much as it supports me.”

Heading into the Kona competition in October, Cliff had two goals. First, to finish. “You only get the medal if you finish,” he said.

Second, to beat the time of Kevin Cleary, Clif Bar & Company’s CEO. Kevin competed in IRONMAN Kona in 2016 and finished in 13 hours.

When he arrived in Hawaii five days before the race, the nerves hit Cliff pretty hard. He saw the professional athletes getting off the plane and watched them train and began to wonder what he was doing there.

“Everyone looked like they were the best of the best, because they were!” he said. “I started thinking, ‘Should I be here? Do I deserve the spot?’ Knowing that I come from just no endurance background at all, I just started hoping I wasn’t the last person to cross the finish line.”

Cliff headed out on his bike for a couple of training rides and found the course harder—and hotter—than he expected. Mentally, it started to get to him.

But then something special happened. Everywhere he went, he ran into someone from Clif Bar. And everyone he bumped into had something good to say. “They greeted me, they cheered me on, they made me feel like I did belong there, I did earn the spot, I should be competing,” he said. 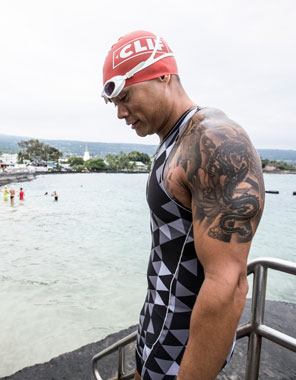 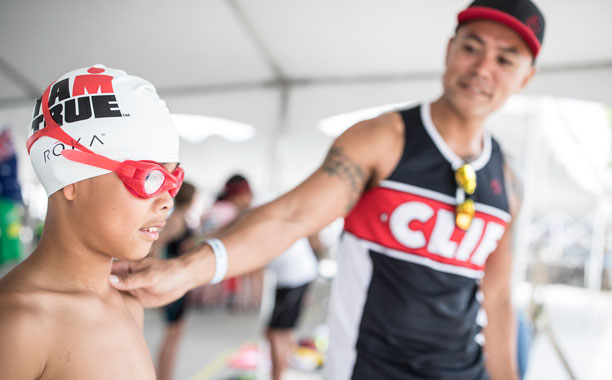 Knowing my kids were nervous helped calm me down, somehow. I knew they could do it, just like everyone else knew I could do it. 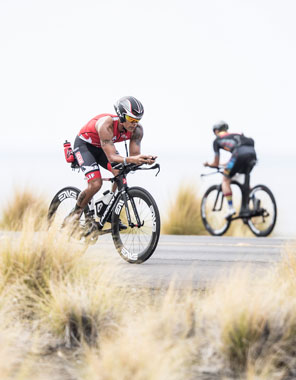 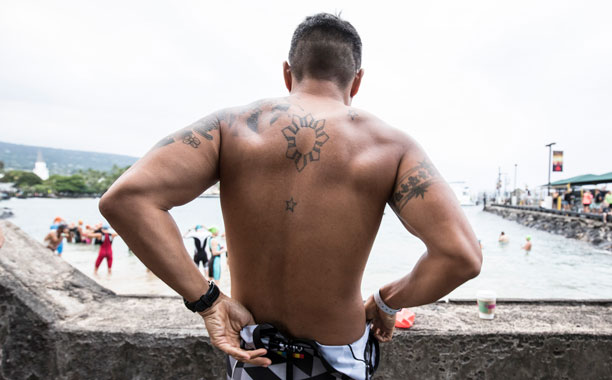 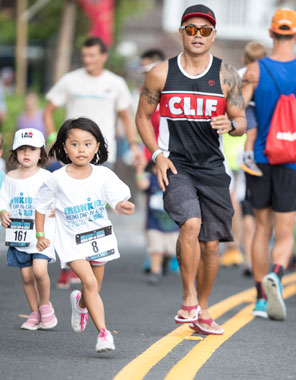 At a Clif Bar barbeque, he met CLIF triathletes Linsey Corbin and Ben Hoffman, and they gave him advice, athlete-to-athlete: “Race your own race. Don’t worry about the other athletes out there. You’re going to do great.”

“Hearing it from a pro, I was like, ‘Yeah, I am. I’m gonna do great,’” Cliff said. “Every positive thing people said to me just chipped away at my doubt.”

And then there were his kids. Crimson, Cyrus, and Cali were so nervous about competing in the IRONKIDS race—to them, it was just as big of a race as Kona was to their Dad.

Cliff had to inspire them and remind them that they swim and run those distances all the time at home. “Knowing my kids were nervous helped calm me down, somehow,” Clif said. “I knew they could do it, just like everyone else knew I could do it.

“And they did great! I ran with my daughter, she wanted me to run with her, but at the turn-around point she said, ‘Bye, Daddy!’ and she just took off. She dusted me! I couldn’t keep up with her,” Cliff laughed.

“Once they got into it, they knew they could do it. I took the same approach to my race. Water’s rough? I can swim through it. Road’s hot? I can cycle through it.”

It was 98° with 90% humidity on race day. But waiting at the starting line, Cliff said he felt more comfortable than ever before at the start of a race.

“I was just soaking up all the support from everyone, from all these elite athletes around me, from Clif people, from my family. It was an incredible experience,” Cliff recalled.

“Every time I saw someone on the course, I was smiling. I was actually enjoying it, I wasn’t just smiling for the camera. I was really enjoying the whole experience.”

In the end, he met his goal…both of them. Cliff finished IRONMAN Kona with a time of 12:52, eight minutes under plan.

And Kevin Cleary was there to see it. Clif employees formed a tunnel for Cliff to run through, just before the red carpet at the end. “Of all the people that raced Kona that day, I probably had the best cheering squad. Because Clif Bar was there and everyone was so supportive,” Cliff said.

“Kevin being there on course was so cool, too. Sure, there’s a competitive rivalry between us. But he cheered me on, he was rooting for me all along the way. He wanted me to beat his time.”

Would he do Kona again? Well, yes and no.

“Yes, because it was just so awesome of an experience,” Cliff said. “But no, because Kona is the pinnacle of the sport, and I looked at it like a once-in-a-lifetime opportunity. It’s a good way for me to top off my own journey of getting to the IRONMAN distance. But I don’t want to dilute it, so I don’t want to do Kona again…unless Kevin wants to race me on the same course!” 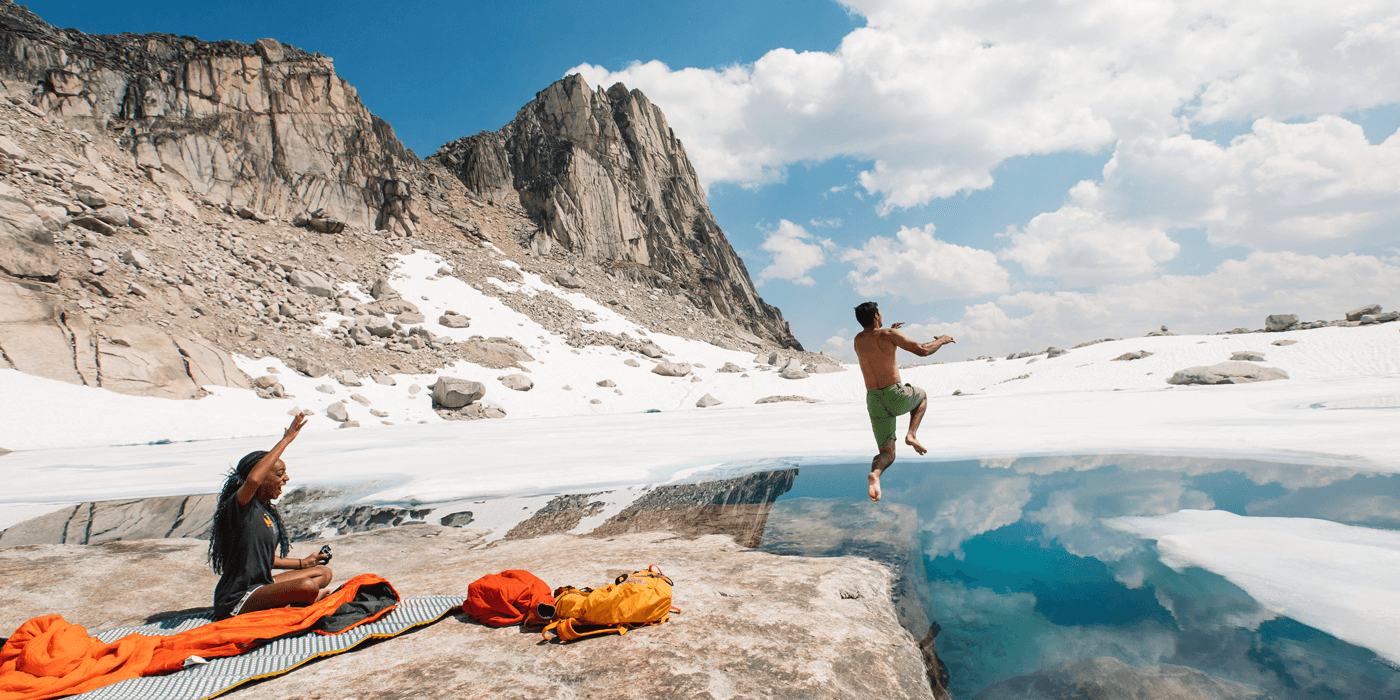 What just happened here? Seven guys rode their bikes 3,300+ miles from San Francisco up the coast on Highway 1 to Seatt…