“Is that everyone through the checkpoint? Can we start breaking down the aid station?” asked a volunteer at the 15.5-mile checkpoint of the 2019 Western States 100-mile Endurance Run. “What about the blind guy?” said another volunteer.

“That would be me,” Kyle Robidoux called out to the female volunteer as he entered the Red Star Ridge checkpoint, having overheard the exchange.

“But you’re looking right at me?” she responded quizzically.

Arriving at the Red Star Ridge checkpoint some 40 minutes after the 10:30 a.m. official time cutoff didn’t feel like the right time for Robidoux to share blind awareness training with the volunteer. He had fallen more than a dozen times that morning and despite his best efforts and determination to continue, he had lost his battle against the clock. His participation in the iconic Western States 100-mile ultramarathon had come to a close after six hours and just over 15 miles. That was well short of his goal to reach the finish line at Placer High School.

Had he been able, Robidoux would have explained to the volunteer that he suffers from retinitis pigmentosa, a hereditary and degenerative disease that was diagnosed when he was 11 years old. This extreme version of tunnel vision has left him currently with just a 3–4 percent field of vision. Can you imagine staring at the world through a paper towel tube?

Robidoux is using his narrow view of the world to expand the boundaries for many athletes with different abilities to participate in running races and athletic events around the world. While he may not have been able to complete the legendary trail race from Squaw Valley to Auburn, California, this past June, he was the first known visually impaired athlete to toe the line. In doing so, Robidoux has been successful in raising awareness and highlighting the importance of athletes with different abilities participating in such prestigious events.

Robidoux didn’t start his running career with the goal of advocacy for visually impaired athletes. He started running for a more mundane but vitally important reason: personal wellness. In 2011, weighing in at close to 250 pounds, Robidoux was struggling to play with his two-year-old daughter, Lucy, and was diagnosed with high blood pressure and high cholesterol. When doctors prescribed medication to manage these high-risk health issues, Robidoux’s response was to run his way to better health.

“I ran for a minute, and then five minutes, and then an hour … when I reached two hours of running, I figured I should probably sign up for a race!” he recalls with a laugh. Robidoux completed the Portland, Maine, half marathon in November 2011.

In Robidoux’s mind, the path from that first race to ultramarathons was straightforward and systematic: “I just kept moving forward.” He began by running road marathons, but over time he became bored of the training. He loved running but was looking for a fresh challenge. “I wasn’t motivated to run another marathon,” he explains, “so I signed up for a 12-hour race, and the training for that was just what I was looking for.”

The Western States ultramarathon popped up on Robidoux’s radar a few years ago, when a fellow athlete described the course as “quite runnable” in contrast to other trail races that covered more technical terrain. After gaining entry through Clif Bar to the 2019 edition, Robidoux’s first opportunity to test that runnable theory came at a training camp on the course this past spring. Robidoux and other athletes would cover the terrain from mile marker 30 to the finish line over the course of three days.

“The Western States Training Camp was, no pun intended, a huge eye opener,” shares Robidoux. He was confident in his training and the fitness he’d gained since the beginning of the year, but he was surprised by the level of technical terrain and how slowly he moved along some trails. Internally, he questioned whether he had made the right decision to sign up for the race. “But that’s why we do these races … to challenge ourselves.”

On Saturday, June 29, at 5:00 a.m., the firing of a shotgun marked the start of the 2019 race. Robidoux and the first of his five guides began running up the Escarpment, a 3.5-mile climb out of Squaw Valley to an altitude above 8,000 feet. As a visually impaired athlete, Robidoux needs guides to direct him along the trail and verbally point out hazards along the way, but they do not offer any physical assistance. “I feel like I climbed strongly and was moving well enough without taxing myself,” recalls Robidoux. He was positioned mid-pack of the 300-plus athletes participating in the event.

After cresting, the subsequent downhill was particularly treacherous, requiring extra care and caution for Robidoux and enhanced verbal feedback from his guide. “I could sense that there was a line of folks behind me as we were moving so slowly,” laments Robidoux. “It was hard for me to just pull over on the trail and have 15 or so people run by me when I knew I had as much, if not better, fitness than them.” Stopping on the challenging downhill section to allow faster moving athletes to pass by left Robidoux and his guide solidly at the back of the pack.

It had been a particularly long winter in 2019, with unprecedented snowfall in Northern California, leaving the next section of trail still covered in snow. While race organizers warned athletes and prepared them for the icy conditions, Robidoux struggled with the snow on an off-camber trail. “There were numerous times where I slid down on my butt,” he remembers, “picking my feet up as I went down.” He even took a detour at one point since his guide did not feel comfortable talking Robidoux down a particularly tricky section of trail. The pair climbed higher to avoid the terrain.

Eventually course sweepers caught up with the duo, and though they encouraged and cheered on Robidoux, they pointed out that he was up against the clock. “I prepared for that moment and I made a commitment to myself that I wasn’t ever going to call the race for myself, they would have to tell me to get off the course.” Robidoux knew that he wasn’t going to make the first time cutoff, but he remained steadfast, knowing that he would run hard for as long as he could. His race came to an end at Red Star Ridge, mile marker 15.5.

A few days post-race, Robidoux is equivocal about whether he will try Western States again. “At the end of the day, it’s not about me finishing a race, or not finishing a race, or even participating in a race,” he states, “it’s really about raising awareness about abilities and inclusion.” He’s thrilled that a race as prestigious as Western States embraced the participation of a runner of his caliber with “really bad vision,” and he’s confident that it has had a very positive impact on the running community.

Kyle Robidoux is an avid skier, runner, beer enthusiast, and nonprofit manager working with the Massachusetts Association for the Blind and Visually Impaired. He was instrumental in founding United in Stride, a matchmaking tool for visually impaired athletes to identify running partners and guides. He lives in Boston with his wife, Jill, and his 11-year-old daughter, Lucy. 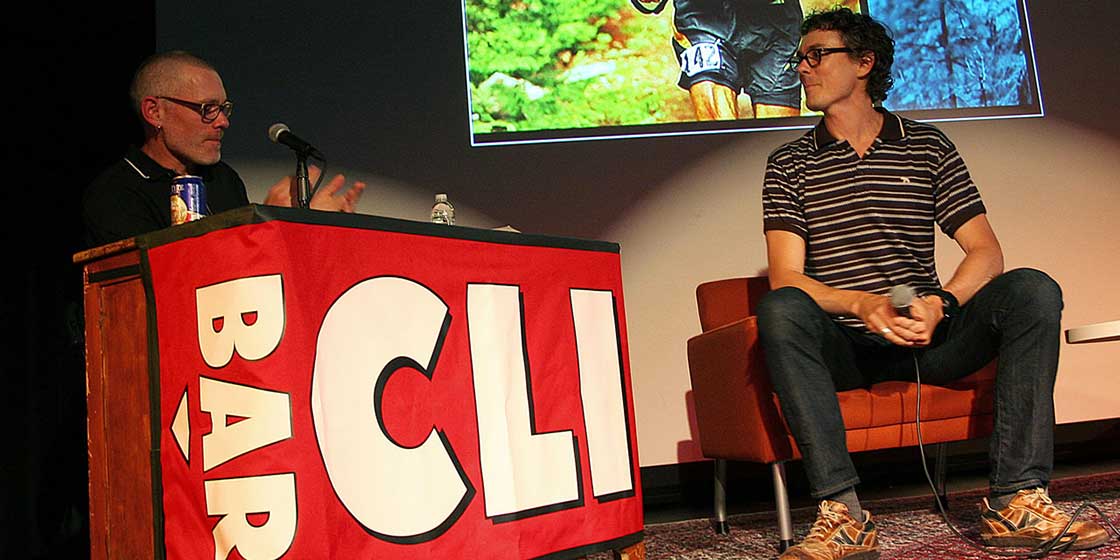 Legendary ultra-runner Scott Jurek joined us at the Clif Bar Theatre for our Team Clif Bar Presents series, and we wante… What Should I Eat Before Running?

By Kelly Jones MS, RD, CSSD, a consultant dietitian who works with Clif Bar & Company, in professional and collegiate sp…